So Others May Eat (S.O.M.E.) of San Miguel de Allende, Mexico

The S.O.M.E. program, initiated over three decades ago, was the brainchild of Antonette Lim.  It had its actual beginnings however in 1956, when Antonette was only 11 years old. At that time, while living on farm in the Philippines, she would help her parents on Wednesdays  by packing milk and meat left over from the market to give to the old folks that were in need.  In essence those days fostered a sense of community that would never leave Antonette.

After moving to San Miguel de Allende in 1984 and while director of the Parroquia’s Sunday School Program there Antonette realized something that seemed to pull on her childhood memory. As she and her three-nun assistants were preparing over 500 hundred children for their first communion, which included providing a lunch, Antonette noticed that many of the grandparents who were in charge of picking up the young ones appeared to be the same elders who were begging in the streets of San Miguel. It was quite clear to her that although many organizations were helping the young people, the older ones were most often ignored.

Drawing on her youthful experiences, and with the help of her husband Joe, the Lims then approached the Parroquia to allow for food to be prepared and served to the elderly poor. So it was that in February of 1989 the first hot meal was served on a Wednesday to 11 grandparents under the S.O.M.E. umbrella. The gathering shortly grew to 50 and eventually to the 180 to 220 that one now sees on any given Wednesday.

Antonette passed away in August of 2016.  Fortunately, Dr. Grace Joanne Lim Baga, Joe and Antonette’s youngest daughter, was able to move her medical practice (along with her husband’s practice as well) to San Miguel and she has taken the role of her mother in the S.O.M.E. program.  In short, although Antonette is truly missed, it is with her spirit and energy that the Lims continue the program efforts.

Of course the major focus of the program remains providing a Wednesday luncheon for the elderly who attend the weekly gathering. In a sincere demonstration of respect and humility the attendees are greeted, seated and then served a hearty and nutritious three-course meal. These meals are prepared by a small, dedicated staff and served mainly by local, national and international volunteers – all people who Joe Lim likes to reference as the backbone of the charity work. Continuing at San Miguel’s Parroquia church the weekly event is accompanied by music, songs, dancing and prayer – a truly heartfelt and interactive experience for everyone involved.

There is significant effort that precedes the actual preparation and serving of the lunches. The purchase of the meal and cooking items as well as the beverages for such a large group includes 2-3 days of shopping, something the Lims manage to do on their own.  Once this is complete the items are brought to the church (much of it by the Lims) and then organized in the kitchen for preparation. The list of items needed weekly is quite extensive and includes: milk, juice, rolls, tortillas, ham and/or chicken, cheese, cream, rice and/or pasta, beans, vegetables, fruit, cooking oil, cooking condiments, napkins, cleaning products and gas to operate the stove-tops and ovens.

The budget considerations include the items listed above and stipends for a number of working staff. Also there are expenditures related to holiday and birthday gifts for the attendees as well as for funerals for those unable to pay these expenses. The average total cost of the luncheon program runs $48,000 USD per year. (A detailed review of the budget is always available for interested donors.)  In addition to the luncheons the Lim family activities also include Family Social Integration Meetings, Leadership Training and Hygiene Classes, Prison Visitations, Ladies Sewing Cooperative, a Food Pantry Outreach and the administration of a Benevolence Fund that provides for people in need. Although the Lims contribute money from their Spa business located in San Miguel to support their overall span of work additional funds come from the Christian Church Outreach, individual donations and a number of fundraisers.  In this sense the Lim’s efforts, including the luncheons, represent a true community-wide endeavor.

There is a saying by Winston Churchill that goes:  “We make a living by what we get – we make a life by what we give.”  When I attend the Wednesday gatherings, and watch what unfolds, I can’t help but feel the true nature of these words.

- Statement prepared by James Palombo, friend of the S.O.M.E. program - 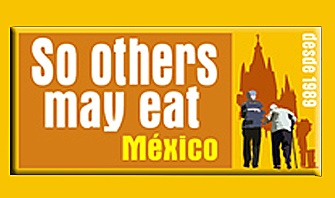